The project GRUDE – Green Rural Economy, works from the rationale that local actors are key players in creating and implementing green growth and green innovations. Thus, green growth activities require a strong territorial approach that is supported and boosted by best practices from other regions. GRUDE based the networking activities on the recognition that there is already several existing networks and initiatives of networking activities aiming to catalyse the green shift in Lapland. During the spring 2021, GRUDE also entered the Nordic Circular Arena (NCA), “the first multi-stakeholder platform for the circular transition in the Nordics”. By joining NCA, GRUDE had an ambition to provide a rural Lapland perspective to the international network, and to offer enhanced networking opportunities and value for green stakeholders in Lapland.

The project GRUDE (2018–2022) is funded by Interreg Nord (2014–2020), within the topic called “3.4 Culture and nature” at the time. The project is managed by Lapland University of Applied Science, and other project partners are Natural Resources Institute Finland, Strukturum i Jokkmokk, a company that works with business development, from Sweden and SINTEF Nord, a research institute located in Tromsø. GRUDE is a knowledge collecting- and sharing project, with the overall aim of contributing to greener knowledge and attitudes in Lapland.

Green Lapland – Collaboration as a strategy

The starting point of the GRUDE project, is the challenges, but also opportunities, particular to the NSPA regions (Northern Sparsely Populated Areas) (OECD, 2017). The NSPAs are hallmarked by the geography, like the harsh climate, access to natural resources, combined with the small population, and great distances between settlements and from market. OECD (2017) emphasises that “enhancing cross-border collaboration would enable NSPA regions to better address common challenges and opportunities”.
In their study, the Ellen MacArthur Foundation (2013) identified four building blocks to mainstream the circular economy, together with four enabling factors, amongst these cross-chain and cross-sector collaboration. Further, collaborative platforms facilitating cross-chain and cross-sector collaboration have been identified as an important enabler of circular economy in various literature (Zagragja and Rydningen, 2016, MacArthur, 2013, Leising et al., 2018, Ghisellini et al., 2016).

Green knowledge and action across sectors and borders

The scope of GRUDE is rather wide. Although public sector is considered the main target group, because of the founding topic area, the project acknowledges that a successful transition to a greener economy require a multi-stakeholder approach. Thus, the project has target multiple stakeholder groups.

Consequentially, the project scope covers a variety of business sectors and value chains. As an attempt of narrowing, the project identified three focus areas: i) arctic bioenergy, ii) blue economy, and iii) sustainable societies. As GRUDE stretches across the Lapland countries, all with somewhat different practices, laws and regulations, and political and civic discourses, the project has had to navigate in a wide and diverse landscape. Lastly, the project also aims to cover Sami perspectives into the project.
Given this wide scope and aim to operate across borders and stakeholders: How can GRUDE be a forum where all of these are considered? We will get back to this shortly.

To enable the project goal of gathering and sharing knowledge to catalyse changes in attitudes and action, GRUDE has defined three work packages i) Knowledge gathering, ii) Sharing knowledge, and iii) Networking. Each work package includes several activities associated with the program goal.

– Knowledge gathering included conducting of interviews and workshops, and the collection of best green and circular economy practices suitable for Lapland

– Networking included working to identify and connect to central networks and stakeholders in the region, and contribute to the establishment of an infrastructure for networking in Lapland

The project team have worked deliberately to see across these three axes, amplifying each of the activities. In this article, we elaborate specifically on how GRUDE has worked to provide networking possibilities, as an incorporated part of the project activities.

The idea of networking

At the initialisation of the project, our ontology on the notion of “the GRUDE network” was focused on the term as a noun, that is, “a network”. This focus represented the recognition that it is necessary to join forces in order to succeed with the Green Shift in Lapland. As the project went on, we shifted our focus towards the verb, “to network”. This represented for us an ontological shift where we started working more targeted on approaching networking as an activity incorporated in all project activities, rather than deeming network building as a separate and formal activity.

This shift stimulated the idea of considering GRUDE as a node within a greater network, rather than the network itself. Thus, it helped us with the conceptualisation of the micro-, meso- and macro level activities to facilitate networking.

Some of the actions to ensure networking has been less concrete, that is, e.g., providing spaces for people, businesses, researchers, public sector actor etc. to meet each other and share their knowledge and experiences. Further, GRUDE facilitated networking on social media, through the English language Facebook page and regional Facebook groups in all three countries, providing networking possibilities in the target individuals’ and organisation’s native language.

Other actions have been rather specific: e.g., as part of the Greennovation Camp, we incorporated “Networking padlets” as a part of the activity, where all participants, but also invited keynote speakers and the project team, were encouraged to add their business card and contact information to be available after the event. This was also done at a smaller level in the workshops, where email lists were distributed to the participants after the event. 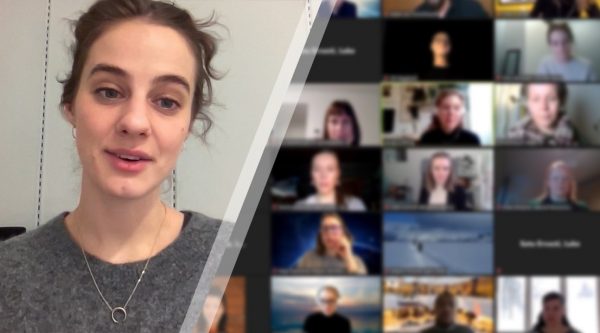 Figure 1. During the Greennovation Camps, the project focused extensively on facilitating networking for the participants.

From the project initialisation, GRUDE based the networking activities on the recognition that there is already several existing networks and initiatives of networking activities aiming to catalyse the green shift in Lapland. Thus, the project worked consciously not to establish competitive or rival green networks and potentially puncturing or ebb pre-existing initiatives. Instead of trying to form an alternative network, GRUDE invited networks from all three regions to a total of three pilot networking workshops, aiming to identify potential areas or activities that GRUDE could serve, based on the needs of the invited networks. From these workshops, GRUDE identified e.g., the need for a collaborative platform across borders. It was during these workshops that GRUDE gained contact with Nordic Circular Hotspot. 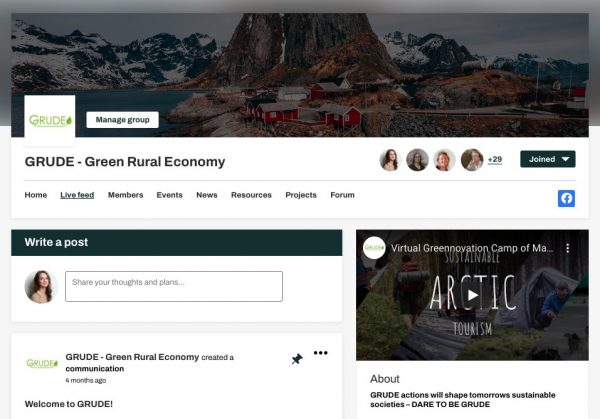 Further, NCA was built on a similar idea of network of networks, as well as the weighting of collaboration as a key to sustainability, as GRUDE was aiming to achieve. Thus, GRUDE joined NCA as one of the pilot networks. By joining NCA, GRUDE had an ambition to provide a rural Lapland perspective to this international network.

Digital networking during and after Covid-19

Covid-19 struck, and radically affected work processes, accelerating the trend towards working digitally. Early estimates from Eurofound (2020) indicated that close to 40 % of workers in EU began to work remote fulltime because of the pandemic and imperatives for social distancing. The acceleration of digitalisation enables more equal opportunities to participate in global co-operation. Utilising digital infrastructures and work processes benefits particularly sparsely populated areas such as Lapland.

Digitalization can ease the logistics of the work and information flow and reducing travel and physical meetings have an obvious economic and environmental benefit. In GRUDE, a shift to totally digital events and meetings was a measure due to covid-19, but most probably prompted to involvement and increased the possibilities to participate. However, keeping up with the digital shift will require efficient platforms for digital collaboration. We argue that the Nordic Circular Arena and the GRUDE Network therein could act as such. Further, our ambition is for the GRUDE network to provide a space for Lapland specific issues, ensuring that the voice of Lapland is represented and visible in this “Network of Networks”.

While providing and developing networking activity, the GRUDE project will compile a Networking Manual to be used by other regions across EU and the world, to foster Green Growth cooperation in their areas. Based on our experience, the GRUDE project would encourage others to see networking as a joint action, stretching across different activities in the project. During the project, we have experienced that networking is not a separate action, but something that happens all the time.

However, utilising the opportunities for networking inherent in a project, require exercising of consciousness and awareness in the process of planning and facilitating of networking in all those parts of the project where it is natural and fruitful to do so. If one in projects are not aware of the possibilities that exist in the project, or do not plan for the utilisation of them, projects risk not being rigged for it when networking occurs, or simply miss out on such activities overall. This will be covered and further elaborated in the Networking Manual.

You are welcome to join to us

This autumn, October 26th, GRUDE arranged the fifth Greennovation Camp: “Blue Economy – How can we develop the Blue Economy in a sustainable way for the future?”. The online streaming from this even is available, together with our previous events, at the GRUDE project YouTube channel5 and will also be shared on our other platforms like the NCA network. GRUDE is also joining the Nordic Circular Summit 25th–26th of November. Here, GRUDE will present our findings from our “Omvärldensanalys”. Next spring, the GRUDE project will arrange our Green Growth Conference May 2022. We would like to invite readers to join this event. More information about the event will come on the project’s online platforms.
To conclude this article, we would like to invite and encourage readers interested in green issues at all levels; whether on a theoretical or ideation level, or practical level, and from all sectors; both researchers and academics, businesses and public sector employees, to join the Nordic Circular Arena and the GRUDE network therein!