In September, we joined a geological walk in the Pyhä-Luosto National Park, situated in Finnish Lapland. The walk was organized by the local Naava visitor center, and guided by a geologist Peter Johansson. The day started with a lecture, during which we learned about the geological history of the 35-km-long range of hills and fells stretching from Pyhätunturi to Yli-Luosto fell. These fells that today attract an increasing number of domestic and international travelers are standing on Fenno-scandic lithospheric plate, which itself has been travelling across the planet, from the level of Australia to that of Sahara, before settling down to the Arctic area. The fells are remains of the ancient mountains that have eroded and shrunk via geological processes during about two billion years. The processes have also contributed to the formation of various rock types and gorges, of which the park is famous.

The late Ice Age, in particular, played a prominent role in constituting the exceptional rocky landscape that we see and experience today. The border of the retreating glacier reached Pyhätunturi Fell around 10 000 years ago, and the melting glacier formulated the crust, soil, rocks, and the fells of the park. The process has not stopped: the very ground on which we stand slowly uplifts, as most clearly visible in the Kvarken Archipelago between Sweden and Finland. Furthermore, frost weathering, erosion caused by water, wind and gravity, as well as frost heave and frost sorting still shape the landscape, albeit slowly, as they have done since the late Ice Age.

After the lecture, we went for a walk in the National Park, heading first to the Isokuru gorge, which is the deepest one in Finland. The walk was a perfect way to experience and understand the geological epochs and the effects of the Ice Age. At the first thought, the landscape in the park may appear as stable and still, since you hardly see any movement, if you do not count the hiking tourists, the Siberian jays catching breadcrumbs from tourists’ hands, and squirrels preparing for the winter by searching food. 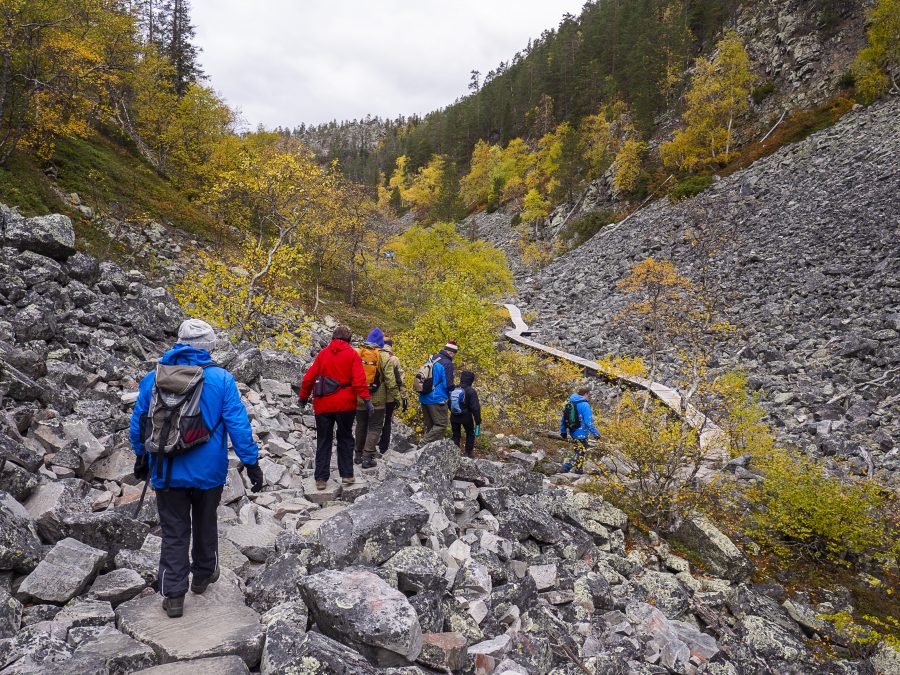 Peter’s talk made the landscape’s geological processes alive. We could image the way the melting ice, waterfalls, and ancient glacial river broke their way through the billions of years old mountains, eroding them into the low, round-shaped fells, how the volume of the flowing water transferred rocks, shaping their figures, and making tremendous noise on the go. The park turned to a place full of events, noise and movements.

We saw rocks that the permafrost had lifted up, others that it had broken down. We saw many rocks types, such as quartzite and conglomerate. We admired the surface of the rock displaying well-preserved ripple marks – a memento of waves of a sea situated here 1,3 million years ago. In the words of one participant: “Those ripples of rocks are the most lively ones. They are so concrete.” We walked through blocks of rocks, transfigured by the folding of the mountains some 1,9 billions of years ago. The walk gave us an embodied and emplaced understanding of the transforming and vital nature of geological processes. Rocks are not so stable and rigid as commonly conceived of, but lively, changing, and constantly transforming – yet, so slowly that this dynamism goes often unnoticed.

After the walk, while driving back home, we talked that it is perhaps human categories that are stable and rigid. In social sciences, the disciplinary home of both of us, the geologic has not been given much thought. It has been either overlooked, or considered as a resource for human exploitation, and kept separated from the social. We therefore applaud the emergence of the geo-social literature that seeks to address this gap. As Nigel Clark and Kathryn Yusoff (2017)[1] argue, it is time to recognize the interdependency and co-existence of the geologic and the social and start to deliberate what this re-linking means in different theoretical and practical contexts. The geological walk we participated in provides one example of how the geologic is made part of the social via offering knowledge of the rocks as part of the embodied and emplaced tourism service.

We suggest that it is time to continue envisioning tourism narratives in which the geologic – rocks, stones and minerals – play a more visible role than to date. Future tourism scholars and practitioners should be better equipped to think, not only of rocks, but with them. Thinking with rocks enables us, firstly, to extend the narrow human-centric time-scale that dominates contemporary thinking, and to move on thinking with the geologic time. This would encourage practitioners to consider the long-term effects of their activities beyond the ‘next generation’ as commonly is the case – after all, our species is just one species in the Earth, and as such a newcomer.

Secondly, thinking with rocks enables us to recognize how all of life, and all earthlings, are entirely dependent on the rocks, stones and minerals. This might open up a space for considering rocks and stones with appreciation, and for noticing their everywhereness. To illustrate, when a tourist takes selfies at the Isoguru gorge with a mobile phone, the phone involves some thirty different minerals – extracted from somewhere, by somebody.

Thirdly, thinking with rocks renders visible the powerful agency of geological processes and events and the profound way they condition and frame today’s social, cultural and economic activities – such as the formation of national parks and attendant touristic activities.

Thinking with rocks is urgently needed in the current epoch called as the Anthropocene. Mick Smith[2], for instance, forcefully argues for the need to attend to creations and creatures that have composed the earth, to make us aware of the ecological and ethical disaster now threatening to frame the future existence of all earthlings. A recent study[3] indicates, helas, that plastic litter can become fused with rocks to form a new material: plastiglomerate. This material could become a permanent part of the geological record, marking humanity’s impact on the world forever. Smith calls for nurturing a future environmentalism in which different endings are possible.

Thinking with billions of years old rocks and with the still ongoing geological processes, situates our species and our activities, in a larger and deeper context, which lacks a single, predetermined conclusion and this way reveals an undecided future.

[2] Mick Smith 2018.  The Anthropocene. The eventual geo-logics of posthuman tourism. In New moral natures in tourism, edited by Grimwood, Caton and Cooke.