Not a trend, but a reflection of tourism transformation

Tourism speaks in the media by the voice of many. Although language isn’t an objective representator of the truth, it constitutes a reality that is interrelated with the life we are living. When media says tourism is undergoing a transformation, an interesting question then is, how is tourism transforming?

According to the Finnish Dictionary, ‘transformation’ is “a period of profound, drastic change, a turnaround.” It is the end of an era – at the same time the beginning of a new one. It raises questions about the past and the future. What then is the past of tourism, what about the future?

I approached the subject through the discourse of slow travel. Slow travel to me, seemed like a mystery slowly unraveling in the media. Often times I’d seen it mentioned, yet rarely defined. It was not familiar from travel agency brochures or could be purchased from Momondo. As an activity slow travel surely (as all travel used to be slow) has a long history, but to the world of language it is fairly new. Interesting, as meanings in language are both historically and culturally constructed, constantly.

Tourism is a cultural activity that lives within society. Travel experiences can be found over a cup of coffee, next door, bed time stories, and travel blogs. The media weaves the voice of many into a network reaching almost every one of us every day. Perceptions of what “the good life” is like and what good tourism is like, are formed fairly quickly in terms of the media.

For a long time in the modern society there has been a perception that faster is always better and that faraway is more exotic and fascinating. Thus, social qualifiers worded by people, such as ‘speed’, have both intentional and deliberate consequences to our reality. Of course, travel behavior has been affected as well. The delay of a train causes distress in us, even though we have no reason to rush to another place.

Nicky Gardner, editor of Hidden Europe -magazine suggests, that development of [“convenient”] tourism has led to more journeys being made than ever before, and paradoxically travel itself less and less appreciated. The enjoyment of travel has been shrouded in the impatient wait to “get there”.

Fortunately, however, speed has a counter-force: slowness.

Slow travel, two words slowly journeying along various media texts, taking a shape of interrelated ideas – a way of speaking about tourism and traveling. The main message that I interpreted by my attempt of making sense of its meanings captured in media language was: tourism needs slow down because the current pace is not sustainable. Slow tourism in this meaning might reflect an attitudinal shift that has already taken place and partly instantiating what’s to come. In the media the discourse acts like a debate opening that captures one’s attention for the challenges of tourism. It asks the industry: does the growth of tourism equal development? Is this development sustainable?

Talking about tourism transformation, I wonder if this change is strong enough to sweep tourism metrics upside down so that complete slowness would soon be more desirable than maximum speed.

Slowing down can bring back a lot that has gone unnoticed at high speed.

You know… in the same way, when taking a familiar car route to your summer cottage by bike for once and noticing how the smell of tarred boats takes you back to those worry-free childhood days already halfway. In that place the old saying “it’s not about the destination, but the journey” makes perfect sense. Slowing down sharpens the senses, allows to notice and fully be there, immersed by the moment. 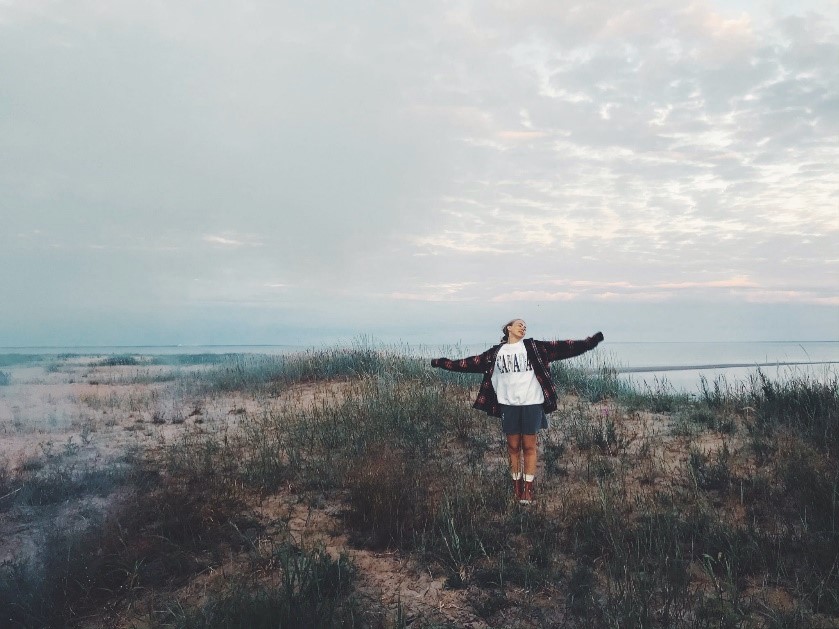 “Why is a Greek grandmother more picturesque than the old lady walking shaky on your home street?” asks one journalist in a news-article (my research material). Accordingly, is it the case that we ourselves have accelerated past our own experiences? Then one might suggest slowing down can change a traveler. But what about the tourism industry, does it have time to slow down?

Gosh, I do hope so. If the development of tourism is interpreted only quantitatively by visitors or euros, not only will an unsustainable forecast of continuous growth be realized, but an alternative development also be framed out. I also, am interested in the development of tourism, but its growth must not be an intent value. In the context of globally expanding tourism and the climate crisis, we do need to slow down and think: how do we talk about tourism – what kind of ideals we create?

Which way is the modern society and its development going – to which way is the recently began trade of ’emission allowances’ taking tourism? It is hard to say, but at least we need to ponder upon the question.

So, slow tourism is not a proposal to take tourism back to some pre-industrial era of sailing boats and bottle mail – although the idea feels tempting – but to consider holistically how to live and travel better in this fast society. Everyone can think about what good slowing down would do to travel of oneself, but common ideas are crucial for the society. Together there is potential to change the culture of tourism – recode its social practices.

While the social acceptability of weekend spins to remote lands is already faltering, new kind of meanings to tourism are already represented by growing phenomena such as proximity tourism, staycations and traveling-by-land. Pioneers of change are looking for new ways to be in the world; ways that are compatible with a sustainable global future. New tourists appreciate slow, small and local: nurturing connections and interaction, as well as meaningful experiences that help them develop individually and communally.

Hence tourism is becoming increasingly meaningful to people despite global crises the earth is facing, the volume of tourism still keeps on intensifying.

It took covid-19 pandemic, to make people stop moving in 2020. But for the future we need to nurture more than the fear of people getting sick – the growing idea of togetherness, including nature and the climate – to attract new tourism culture. This ability is already manifested in growing online-communities such as those who choose to travel only by land (see e.g. Maata pitkin matkustavat in Facebook). Joint narratives can efficiently be used to develop new tourism imaginaries and break down old bad practices. The tourism industry needs new solutions, and I do not think they are far away.