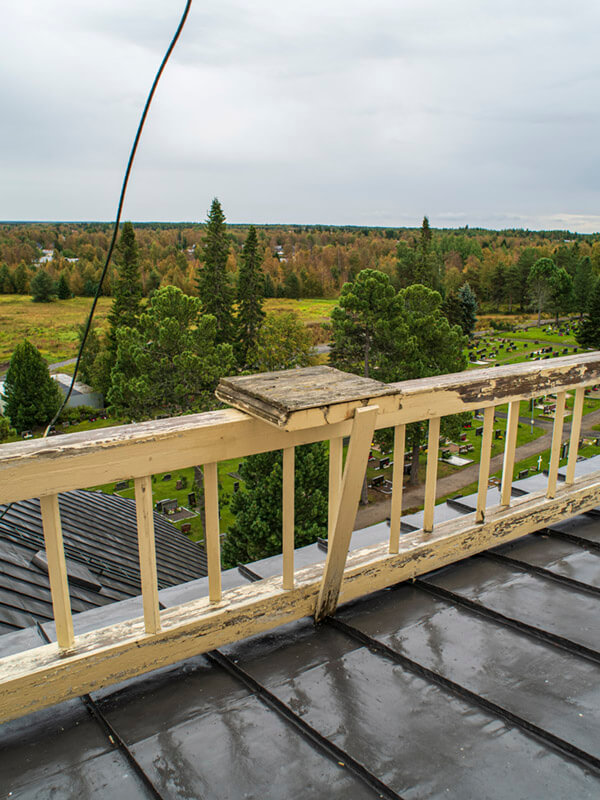 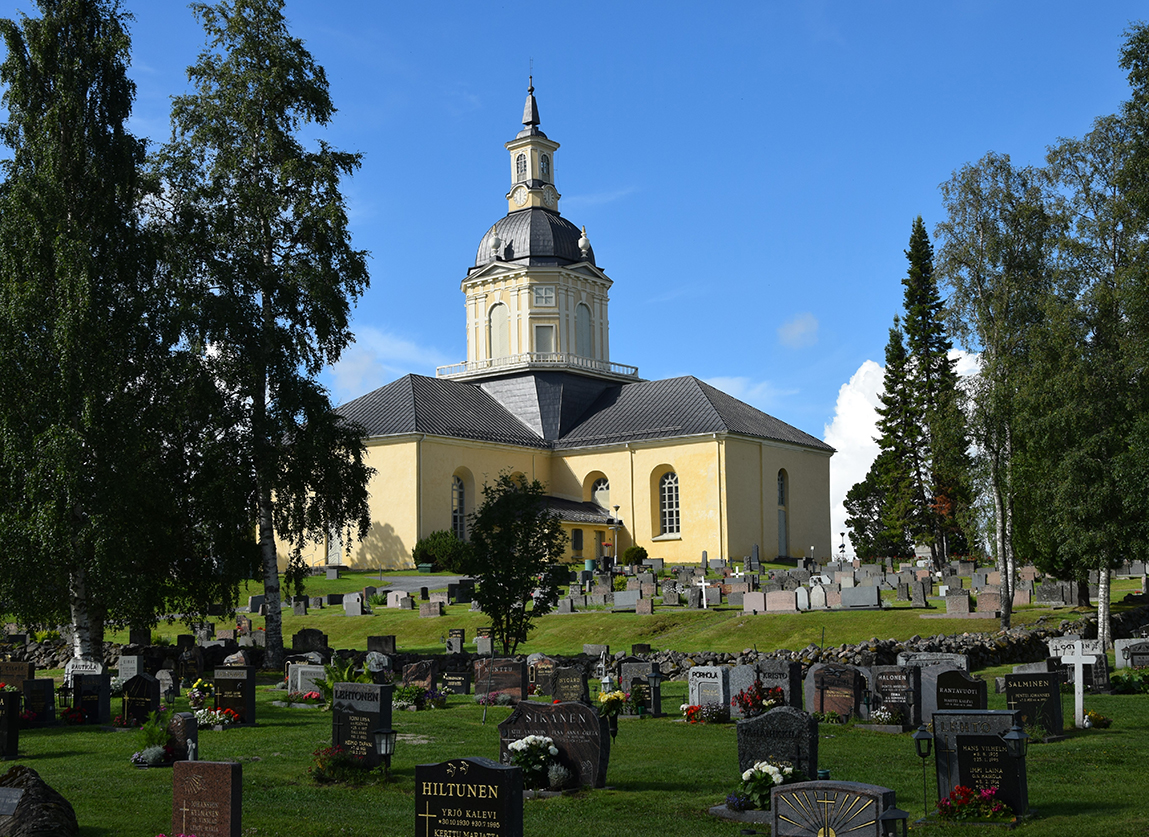 Maps of the area 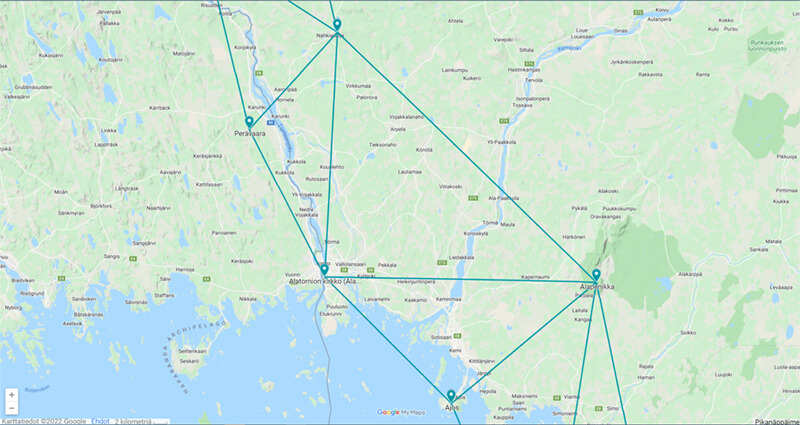 Measurement points in the Extension Network 1 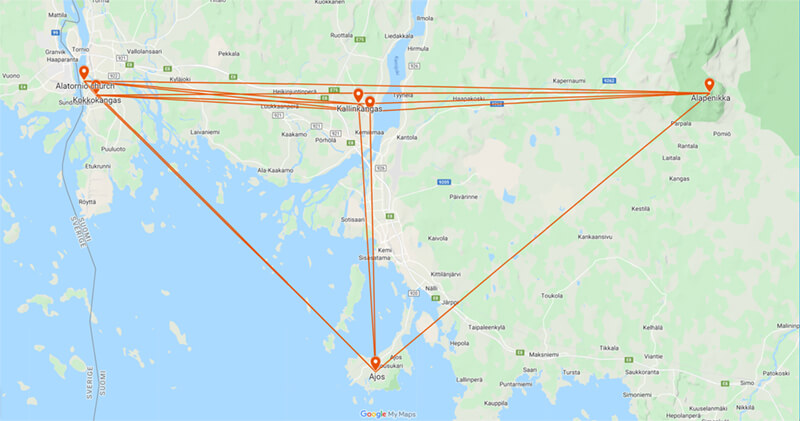 Measurement points in the Extension Network 2 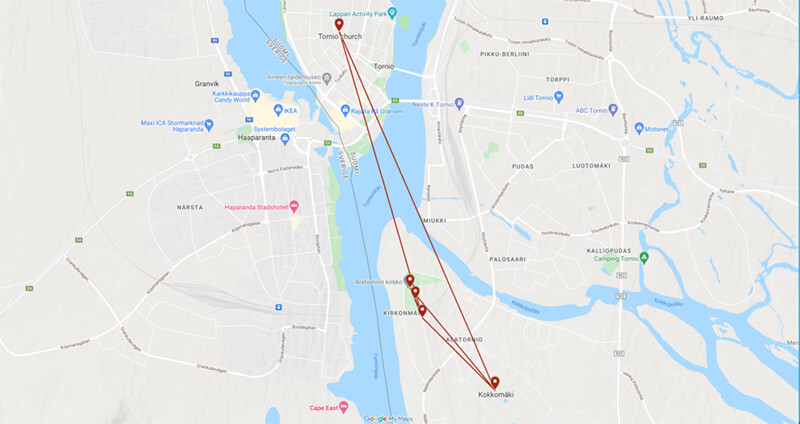 Measurement points in the Extension Network 3 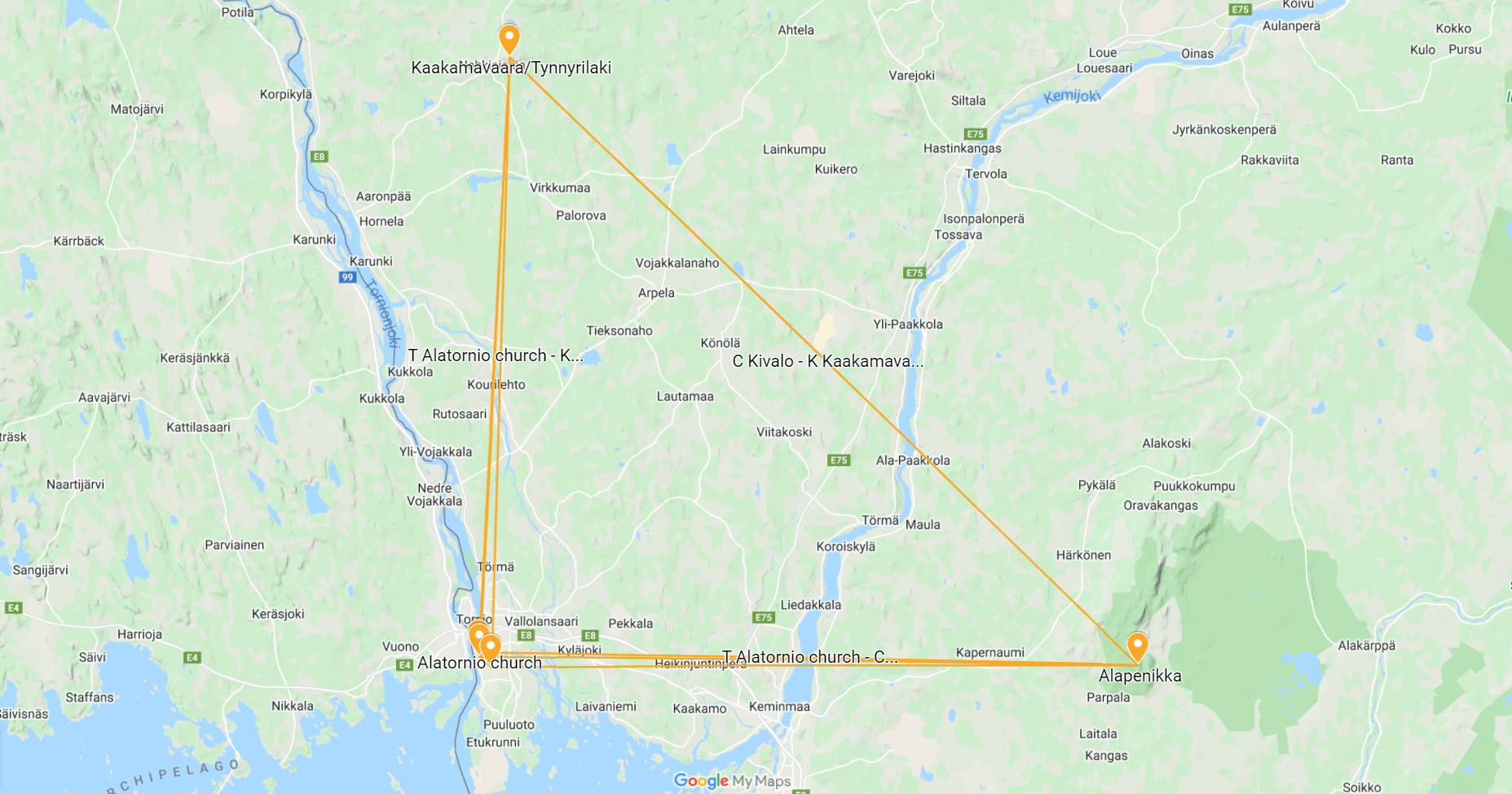 The explorers of the Struve Geodetic Arc rarely utilised buildings in their observations. However, in Kemi-Tornio, they could use three churches: Alatornio church, Tornio church, and Keminmaa (new) church.

In the Alatornio church area, the explores made several types of measurements. They used the church tower and Kokkokangas Hill for triangulation measurements, established a baseline and built an astronomical station in the church’s vicinity.

Alatornio was one of the meeting points where expedition teams from different countries met. It was the final destination for explorers triangulating Finland led by Woldstedt. Later, Selander’s Swedish expedition team continued the measurements from Alatornio to Stuorrahanoaivi. From Pulkovo Observatory, D.H. Lindhagen, with his assistant Wagner measured a short baseline near the church and made astronomical measurements.

At the moment, we cannot identify all the measurement points used in the Alatornio area. The others have remained the same as in the time of Arc measurements. The exact locations of the baseline endpoints are not known as the cemetery has expanded. The tower of the Alatornio church has remained unchanged since that time. A visitor can still see a small shelf in the railing installed for the observers in the church tower. The tower-rooms show engravings on the inside walls. Some date back to the time of the measurements.

Management of the site

The Church of Alatornio is conserved by the Finnish Church Act.

The church tower is not open to the public.

The surroundings of the Alatornio church and the clergy houses on Parasniemi are valuable cultural heritage sites. Near the church, there once were small cottages (kirkkotuvat) for travellers.

The Alatornio church has a central location on a hill on Pirkkiö Island. It is a stone building whitewashed with yellow and can house up to 1200 people. This old religious centre served as a landmark for those who arrived from the river mouth toward Tornio and the Tornio Valley. In the old days, visitors mainly arrived at the church by boat.

There has been a church on the spot since the 13th century. The first church was a wood building. It was replaced by a medieval stone church around 1550. The current building dates back to 1797. It is an expansion of the second church and follows the time’s fashion. The builder Jacob Rijf designed a new-classic cross-church after the example of C.F. Adelcrantz´s Adolf Fredrik Church of Stockholm. The old medieval church was reused as the eastern cross-arm.

Rijf also designed the central altar and pulpit of the Alatornio church and did not faithfully follow the traditional placement of functions in the church. The altar is placed between the south-eastern arms when traditionally in the southern arm. The pulpit is across it, and access to the sacristy is in the eastern-northern arm.

The altarpiece “Jesus on the Cross” was painted by Karl Strömbeck in 1820. The organ with nine registers was made by Gren & Stråhle in Stockholm in 1761 for the second church. They are one of the oldest in Finland.

The building of the church was a communal effort for the whole parish. The nearby villages provided the boards and stone quarry was in Kallinkangas. The magistrates and tradespeople of Tornio bought materials from Stockholm.

The Alatornio church and parish are the earliest signs of permanent settlement in the area. There are several historical clergy houses in the area; 2 in the Parasniemi cape and a third one, Thurevik, 1 km away behind low fields. The Parasniemi clergy house was home to the vicar. The high clergy house in Parasniemi with a mansard roof was constructed in 1786. The other beautifully restored clergy house was built in 1842. In addition to these main buildings, there is a 200-year-old stone cow house and other facilities.

Parasniemi was a famous landscape for painting and photography.

A railway bridge is part of the church landscape. The bridge was built as a joint effort of Finland and Sweden in 1919. It is a steel lattice construction with a dual gauge track, and its length is 245 metres. It was the first direct connection of Tornio to the mainland in Finland. An aerial lift was built in 1916 in Alatornio because, at times, the Torne River could not be crossed. The lift was demolished after the railway bridge was finished.

Crossing the Torne River was a challenge for people living in Tornio City. The town lies on an island in the Torne River. The deepest part of the River flows between the Finnish mainland and Tornio City. Crossing the river could be challenging because of breaking ice or floods. In the 19th century, people used boats and ferries in the summer and by sledge and foot in the winter to travel from one side of the river to another.

Tornio’s connection to Sweden was better for a long time. The island’s northern part is connected to the Swedish mainland in Näränperä. In addition, a walking bridge between Haparanda and Tornio was established in 1887 (Handolin’s bridge). However, it had to be rebuilt every spring because of the ice break-up. In the 1930s, a dike way was built, and horse carriages and cars could travel between the twin towns. It was damaged by an unusually high spring flood of the Torne River in 1934.

Constructing a road bridge between Tornio City and the Finnish mainland was first proposed in 1930. Lack of funding due to recession and shortage of materials delayed the construction work. The bridge was opened in 1939, and it was named after minister Hannula who was the project’s promoter. The bridge was spared from demolition in the Lapland War.

Nowadays, two more bridges can be found across the Torne River in the Tornio-Haparanda area. One for pedestrians and cyclists and one for car traffic. 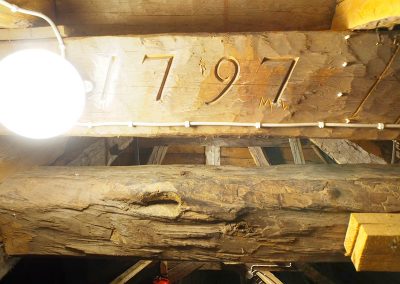 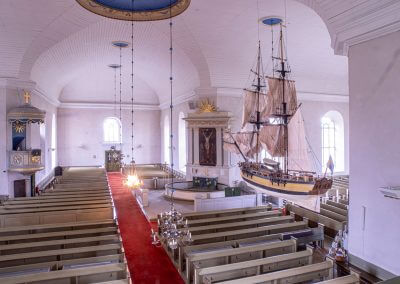 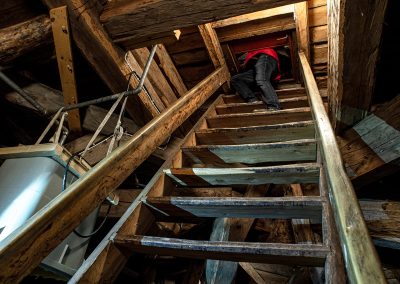 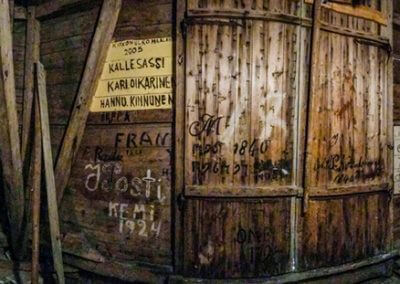