The Illuminators is a documentary feature film recounting how Lapland was electrified, but also about sons following in their father’s footsteps. (Trailer for the film can be viewed at goo.gl/ttrtpq). I worked on the film as the writer and director from 2015 to 2017. Two students from Lapland UAS (Jani Viitala ja Arttu Tuovinen) did their work practice during the film production under my supervision. The possibility to combine my filmmaking career with my work at Lapland UAS has been tremendously beneficial to all parties: myself, the university and the students. In this article I analyse the creative process for the film and explore the theme of co-operation in arctic environment in the story of the film (i.e. electrification of Lapland) and also in the film production itself.

The father of light to Lapland

The story of the film is very personal to me. My grandfather Gunnar Haase, who is the main character in The Illuminators, has been called the father of light to Lapland.  He was involved in the founding of all of the biggest public electric companies in Lapland after the World War II (Rovakairan Sähkö Oy, Tornionlaakso Sähkö Oy ja Koillis-Lapin Sähkö Oy). At first, Gunnar worked as the managing director of them all at the same time. After the companies were up and running, Gunnar concentrated only on Rovakaira. His big mission was to electrify Lapland, so that every home in Lapland wanting electricity would have a power line to supply it.

Having worked as the managing director of Rovakaira for over 30 years, Gunnar retired in 1979.  After a public selection process, my father Hannu Haase became the second managing director for the next 30 years. My schoolmates always said that I would become number three down the line. I became a documentary filmmaker instead. In 1998 I applied to study filmmaking in one of the leading film schools in the world, the Australian Film TV and Radio School. In the entrance tests I had to pitch film ideas to the selection committee. One of the film ideas I pitched was called The Northern Lights. It was a film idea about my grandfather’s role in the electrification of Lapland. I remember that the selection committee considered The Northern Lights to be a very good film idea. Because of that encouraging feedback, I decided to film an interview with my grandfather during my visit to Finland in Christmas holidays in 1998. I sensed that it might my last chance to film with him. The following year, 25th of May in 1999, Gunnar passed away.

In May 2015 I got a phone call from Tapio Jalonen, the current managing director of Rovakaira. He told me that in June 2017 Rovakaira would have its 70 year celebrations and suggested that I make a documentary film about the company’s role in the electrification of Lapland. I soon realized that I must make The Illuminators. My father Hannu Haase is now retired and over 70 years old. This was the last moment for me to find out how Lapland was electrified, who were the men who did it and what my father’s and grandfather’s roles were.

During the editing of The Illuminators in the spring 2017, the interview I shot with my grandfather twenty years earlier in 1998, became a very important archival source for the film. With this material, I could make my grandfather “real living person” for the film audience, in comparison to using just archival still photographs of him.

Gunnar’s efforts to rebuild Lapland seem even more surprising, when I know what he had to go through as a child. My grandfather was Baltic German by birth. His uncle was shot during the Russian revolution. Gunnar’s family narrowly avoided the same fate by escaping to Finland. My grandfather’s story from his childhood paints a bleak picture of how his new homeland welcomed a refugee. Gunnar was teased at school for not speaking proper Finnish. His first cross-country skis were destroyed by schoolmates. 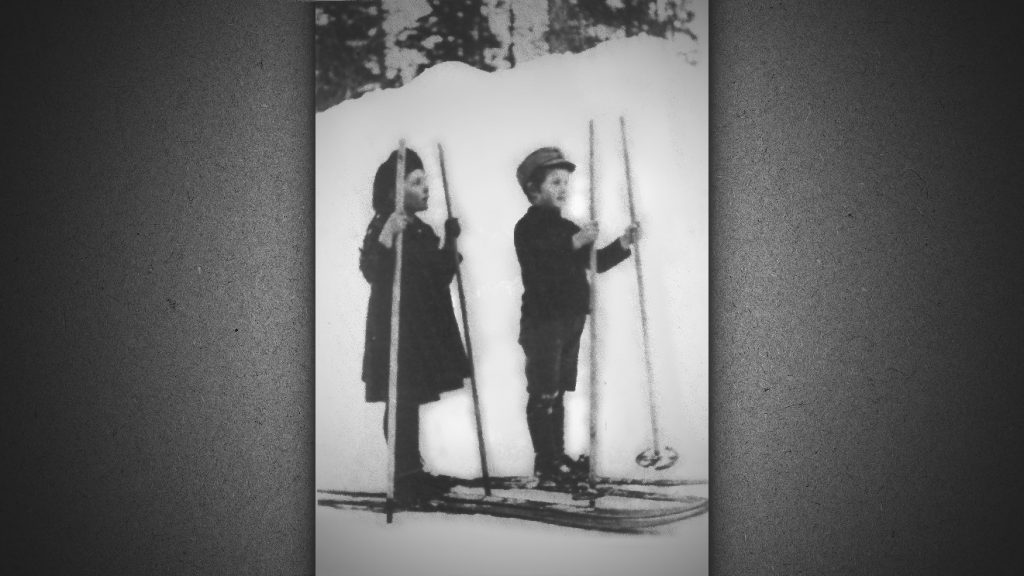 Picture 1. Gunnar Haase and his sister Greta Haase with their new cross-country skis in 1921.

After completing electrical engineer’s degree in Tampere, Gunnar was asked to work for Lapland Reconstruction Office (Lapin rakennuspiiri) to plan how Lapland should be electrified. I have often wondered what Gunnar thought about his’ countrymen when he arrived in 1945 in Rovaniemi to start that job. Rovaniemi had been destroyed by Germans. My grandmother was expecting my father. Grandfather had to start building their own home and Lapland’s electricity network amidst ashes in an atmosphere hostile towards Germans.

After the war, there was lack of skilled work force and building materials. Gunnar suggested that there should be only one electric company for Lapland, which could better pool the scarce resources. However, the urban areas in Southern Lapland feared that they would have to pay higher electricity prices by contributing to the expensive electrification of rural areas. Consequently the companies had to be set up for each natural region or municipality. It seems that the same challenges for co-operation in Lapland already existed in 1940s.

Before I started planning the film, I didn’t even know what a transformer is. This despite the fact that our family archives are full of shots of electricity poles, transformers and cable reels. As a child, I couldn’t think of anything more boring to look at. I soon discovered that the stories behind the building of power lines were anything but boring. Furthermore, the work had a real purpose. In the film, the housewives recall their surprise and relief when electricity finally arrived in their remote village homes in the 1940s, and as late as the 1980s.  Consequently, important “stars” in The Illuminators are the old electrical workers, who share their stories of camaraderie in building the power lines across arctic wilderness with bare hands. 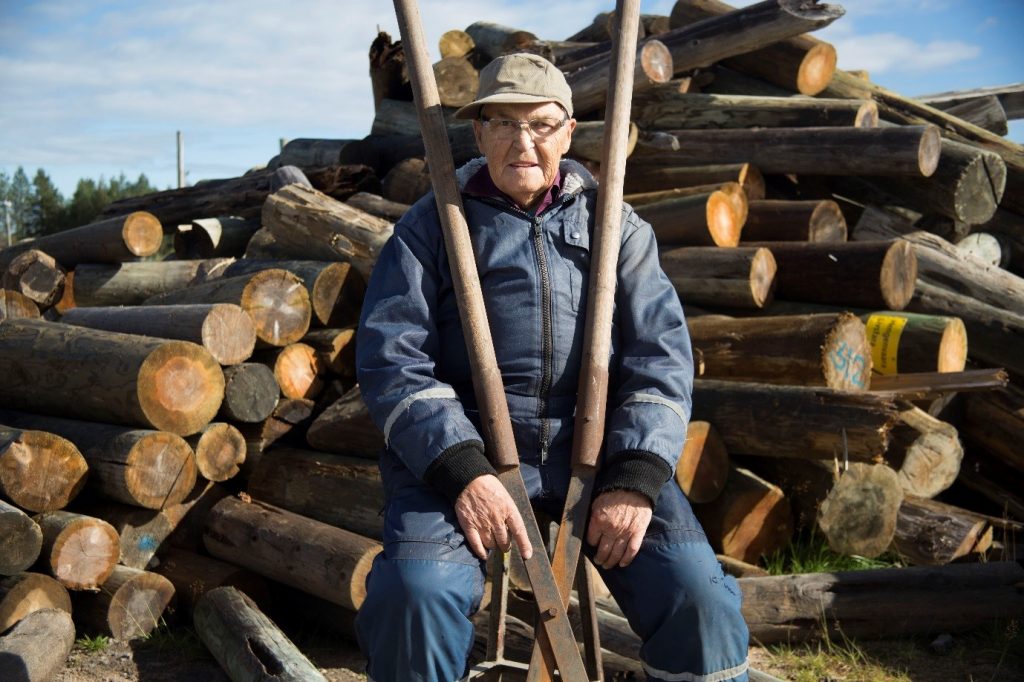 In the late 1940s, newly established electric companies had no cars for transportation. The first electricians solved the problem by carrying the heavy electricity poles by tying them into two bicycles. Without machines, the heavy poles were raised up with the muscle power of 2-3 men. In their stories, electricians emphasize the modern principles of teamwork. Everybody knew their role in the team, everybody did what they were good at and everybody supported each other.

There are unexpected partners for co-operation, if you are open to new ideas. During the filming period for The Illuminators, my father suggested that I film with the old and young electricians raising an electricity pole together in the old-school style. I reckon that was pretty cool film idea from an electrical engineer. It became one of the best scenes in the film. I was so impressed by the old electricians work attitude that I decided to use a speech by Pentti Nissilä , an electrician who lost his hand in a work accident in 1953, at the climax of the film: “Working together. We were like brothers. Like one man moving. We felt like the people depended on us. We worked for the people. We wanted to make the world a better place.”

The last celebration of light in Lapland

As a child, I wondered why my father had to make so many trips to Helsinki and be away from home. Now I have come to understand that he was negotiating for state subsidies, so that even the most remote homes in Lapland could get their electricity. The power lines finally reached the very last Lapland home in Pokka on the 23th July, 1987. The last celebration of light (a tradition for villages who got electricity) was organized in the legendary Alma’s bar in Pokka on the 7th October 1987. 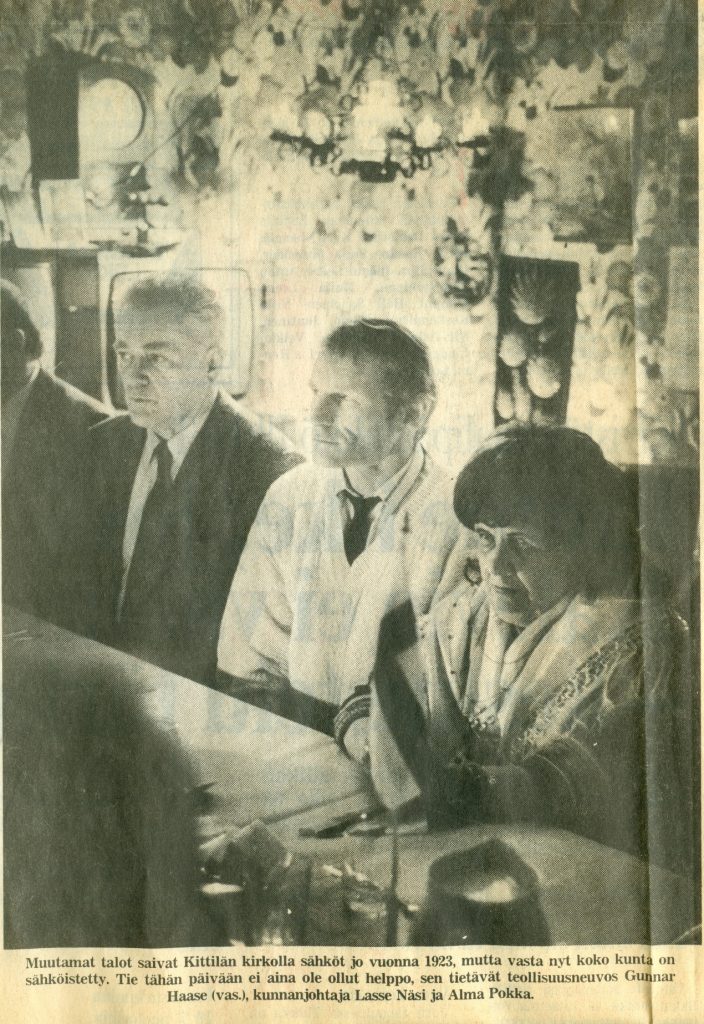 As the managing director of Rovakaira my father completed the electrification mission of Lapland, over 40 years after his father Gunnar arrived in war destroyed Rovaniemi in 1945. Hannu told me that in the last celebration of light in Pokka in 1987, Gunnar was happy that his son had completed the mission. Rural electrification was an enormous undertaking: it brought modern life and equality to people still dwelling in a harsh natural environment. And while the undertaking took a heavy toll, it also illuminated the way forward. During the making of The Illuminators, I personally understood that every boy’s deepest wish is for their father to be proud of his son. That’s why I made the film.