The foundation for international cooperation

In the year 2001/2002, UAS Technikum Wien and Lapland UAS signed the first inter-institutional agreement in the frame of the Erasmus+ programme by the European Union. By doing so, the document laid the groundwork for the basis of the cooperation, which was set out to develop from then on. Over the years, the cooperation has evolved over various fields and formats, e.g. by developing cross-cutting international student projects (CIP), expanding from Mechanical Engineering to the Renewable Energies to eHealth and AI, culminating in a common bench learning project in 2021.

The cooperation between the universities facilitates exchange and networking for the whole landscape of both universities, further raising awareness within Europe and for the programme of the European Union and its member states. Insofar, students are given the opportunity to collect and expand on their (academic) experiences at home and abroad. Each year, delegation visits with colleagues from various departments and fields of both universities ensure the exchange is continuously fostered and further developed. The physical mobilities are covered and partially funded by the Erasmus+ programme and serve as an opportunity for academic and informal exchange, insights into a different higher education landscape as well as the further development in teaching, learning, and research at the own institution. This article sheds light to the long-lasting cooperation between Lapland UAS and UAS Technikum Wien and to its different forms in addition to the traditional Erasmus student and teacher exchange possibilities.

From the year 2014 onward, Lapland UAS has arranged the opportunity for students of UAS Technikum Wien to participate in Erasmus+ internships in Kosmos, Kemi every spring semester. The internship period (20 ECTS in the 6th semester) includes one to three project works from different subjects from research & development & innovations department (RDI), learning environments in different laboratories, especially at Renewable Energy, 3D printing and Electricity Distribution and Automation laboratories. The topics cover professional areas such as 3D printing, home and building automation, energy technologies, mechanical engineering design and electricity production, just a few to mention. Through this, students from UAS Technikum Wien have the possibility to perform their mandatory internship in their last study semester of their Bachelor’s.

The students work with selected topic eight hours per day and five days a week, such as in normal working circumstances. The students receive a supervisor to their project from and receive support to their internship projects also from laboratory engineers, teachers and RDI experts of Lapland UAS. Every semester, a professor from the sending institution visits Kemi to follow the student´s work and to give lectures to Lapland UAS mechanical and electrical/automation engineering students. 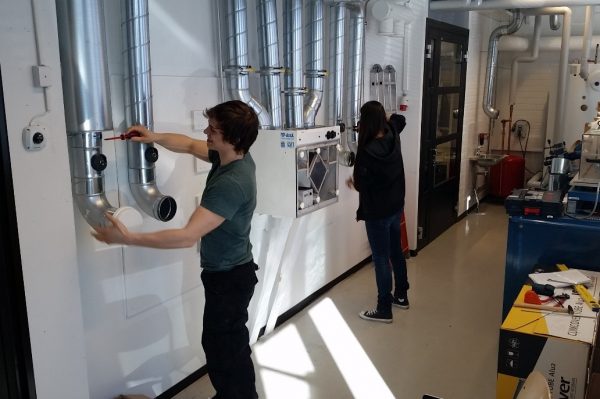 During the spring semester, the UAS Technikum Wien students get to know the artic surroundings in Kemi and Lapland and even the more northern parts of the Scandinavia. During the internship, students have the possibility to visit different industrial companies, cities and even Santa Claus. During the school holidays, students usually arrange trips to Lapland or even to the North Cape. In addition, the students have the chance to take part in the student activities together with Finnish students and experience the winter season through skiing, walking or ice fishing on top of the ice of the sea in Kemi. Therefore is can be said that in addition to traditional studying, the Erasmus+ programme gives the possibility to experience foreign culture and nature in a way which gives a whole new meaning to learning.

One mutual long-term goal between our two universities has been to build an international student project in which students from both countries work together within a real-life topics. This kind of project cooperation enhances the international skills (e.g. language, project-work) of the students and gives them the opportunity to work with a real-life task.

The roots for the project were planted in 2017 when senior lecturers Ari Pikkarainen and Jaakko Etto visited UAS Technikum Wien and discussed about possible topics with Peter Franz, a FH
professor from Renewable Energies degree programme, who has been the main person in the professional collaboration between the universities from UAS Technikum Wien side. The project was named “CIP – Cooperative International Student Project” and the plan was to have the kick-off in fall 2018. From the curriculum point-of-view, the plan was to integrate the project to Lapland UAS mechanical, electrical and automation engineering curricula. This way the project would be automatically an annual project worth of 5 ECTS.

The project includes Renewable Energy students together with exchange students from UAS Technikum Wien. Mechanical, electrical and automation engineering students from Lapland UAS form the representation from Finland. The main topics are divided between four student groups and each group includes students from both universities therefore forming an international group. Every group works with given topic (e.g. district heating production or solar energy) and produce the required results at the end of the project work. Each group has its own supervisor either from Kemi campus or from UAS Technikum Wien providing the group necessary guidance and information about the topic. The start for the project is always in the beginning of September and ends in January.

The core for the project is to plan an energy-concept for inhabited area consisting of district heating and electricity production with renewable energy sources. The topic for the project would be situated alternately yearly in Finland or in Austria. The project includes distant-learning lectures on the topics (via Adobe Connect or Zoom), online project meetings and a one-week visit to Vienna, where student groups are be able to meet face-to-face, work together with the project, visit example locations and give presentations from their work. 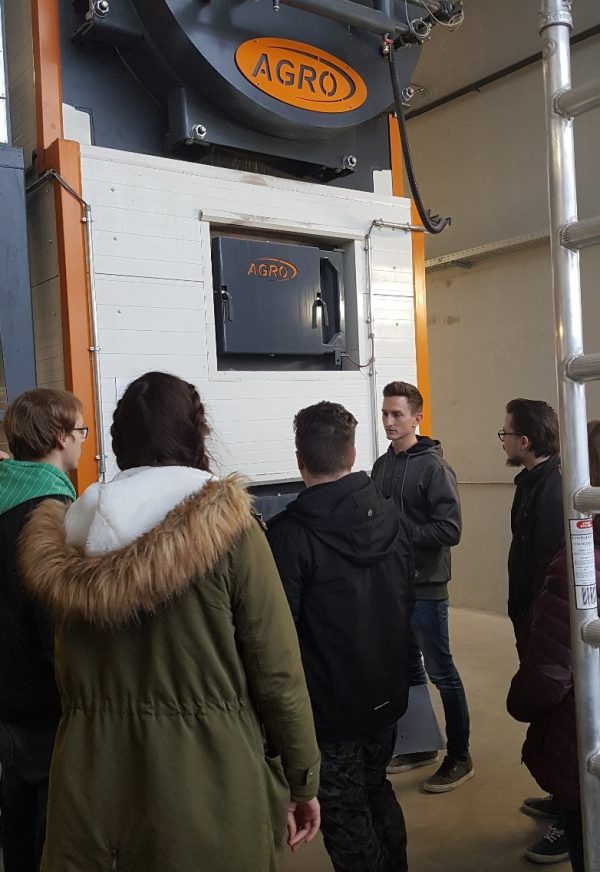 During the writing of this article, the fourth CIP project is going forward with the topic of planning an energy concept for KEM Tullnerfeld OST near Wien, Austria. The experiences from the CIP-projects of the past three years have showed that truly international student project is possible when it is based on solid collaboration and functional distance learning tools.

Continuous development: on the path to a Double Degree programme

Over the past few years, the rectors of the two universities started a discussion about a possible Double Degree programme (DDP) between Lapland UAS mechanical engineering and UAS Technikum Wien renewable energies degree programmes. This was seen as a natural continuation to the academic collaboration and the goal was to build a degree programme where students from both countries could achieve an engineering degree from another European country. The students are able to increase their foreign language competence, academic experience and qualification in international surroundings. In addition, the DDP increases the possibility for them to pursuit work within EU with two international engineering degrees.

The actual planning work of the DDP started in April 2019 when the first draft of the DDP contract was done by UAS Technikum Wien. The students spend a whole year abroad studying in the DDP and this is their third year in their studies. The academic framework of the DDP consists of courses, R&D project work, internship and bachelor thesis. Coordinators for the programme were selected by each university. Peter Franz from the Renewable Energies at UAS Technikum Wien and Ari Pikkarainen from Mechanical Engineering degree at Lapland UAS lead the planning work together with the heads of the education and staff from international offices from both universities. In addition, the student coordinators and education development team participated and gave their support to the development work. The development process of the DDP programme was a good example from the seamless collaboration between many people in different departments from both universities.

The details of the contract were built and discussed during spring 2019 between the universities. The contents of the curriculum (courses etc.) were planned and fixed in fall 2019 forming the academic framework for the programme. The details of the programme were finalised and the actual Double Degree agreement was formed at the end on 2019. The highlight of the DDP program finalisation was in January 21st, 2020 when festive signing event was held at the International office of UAS Technikum Wien in Vienna. Rectors from both universities, Mr. Fritz Schmöllebeck from UAS Technikum Wien and Mrs. Riitta Rissanen from Lapland UAS, signed the Double Degree agreement and therefore gave their official blessing for the programme. 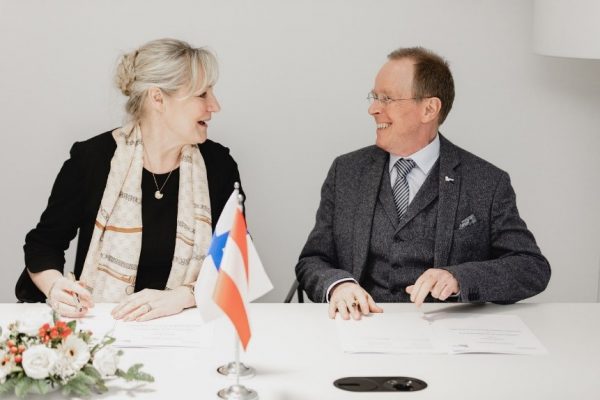 The DDP launched in Fall 2020 when four students from UAS Technikum Wien started their studies in Finland and, vice versa, two students from Lapland UAS in Vienna. The COVID19-pandemic caused quite different study scenarios but despite of this, the students were able to travel to a foreign country to live and study there. The first Austrian students graduated from Lapland UAS in May 2021 after spending a whole year in Finland. The first two Finnish students from Lapland UAS graduated in September 2021 from UAS Technikum Wien Renewable Energies degree programme after a whole academic year in Austria. The DDP programme showed that a solid Erasmus+ exchange programme is a good foundation for developing an international study degree. The integration of the Austrian students to the Lapland UAS study programme was successful since the mechanical engineering curriculum contains courses held in English and the topics support well the studies of the partner university. In addition, the ability to offer internship tasks from the university together with RDI projects, enables diverse and versatile study environment where the students can increase their professional competence. 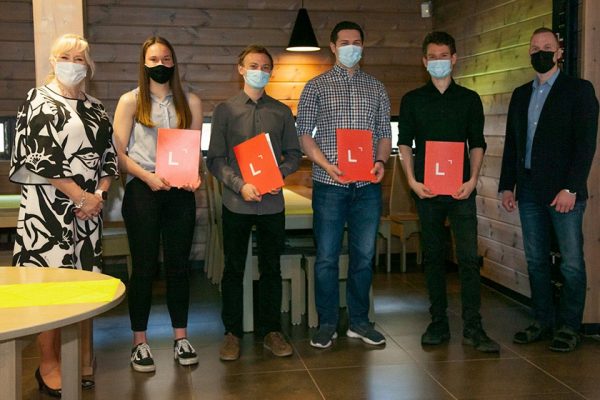 Over the last few years of cooperation, common projects and ideas have enriched the academic life of both universities. Though the COVID-19 pandemic put a halt on the regular travels, virtual meetings were regularly held between the various departments of both institutions. By now, travels are planned in both directions for fall 2021 and again in January 2022, giving the chance to discuss new ways of collaboration together. As a next step, the expansion of Computer Science with a possible Double Degree and an Erasmus+ Blended Intensive Programme on the topic of “Smart Manufacturing in Agriculture or Industry 4.0” will be discussed. Two aspects remain distinct: none of the projects would exist if it were not for the partnership between Lapland UAS and UAS Technikum Wien, and with the commitment of both institutions, there will be even more projects in the future to come.